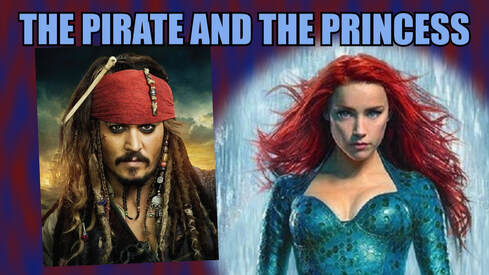 THE PIRATE AND THE PRINCESS
by Magenta Pixie
Magenta, you have mentioned drinking alcohol, especially to excess and taking mind altering substances can open portals to negative entity attachments. What about Jack Sparrow? He has just been vindicated in court and also in the court of public opinion. Did he have these attachments you are talking about?

My reply: I really would rather not get into this subject if I can possibly avoid it, reason being it is highly controversial, very complex and extremely misunderstood including by the jury who gave judgement and by other truthers and psychics I have seen discussing this.

However, you have asked the question so in response I will say this; yes, portals were opened continuously, leading not only to attachments but possession.

Some of these attachments were created by the substances that opened gateways, but others had been there since birth with regular traumas as echo and invitation throughout childhood.

Coupled with different kinds of entity influence within Princess Mera as well and her receptivity to acting as a conduit for the entities within Jack Sparrow. So he gave them the portal and the vibrational platform for them to come through and she gave them life and personality allowing them to attain sustenance from both individuals and anyone else who became involved with them.

This is not an uncommon pattern amongst couples hosting negative entity attachments at all, it is just that this couple continued their battles upon the public stage. The entities do not like to be seen and will disguise themselves from their host. Mera saw them and became closer to them more than anyone else had in Jack’s life before which created the most intense, close and intimate connection and yes indeed love, between them, than either of them had ever known previously. A connection virtually impossible to sever in this lifetime and will continue onwards depending on which path they take at end times.

Much of this was exposed on the world stage when Mera explained how she was in a relationship with multiple different Jacks depending on the substance he had consumed. It also explains why Jack Sparrow is so believable when he speaks of his innocence because it was absolute truth to him, having no memory of the possession and takeover of his body or his actions whilst under possession.

The negative entities within both individuals worked to create a disguise for themselves through drawing out the personality tendencies within Mera that are exaggerations and falsehoods in order to render all her recounts and testimonies as false in the eyes of those called to bear witness and deliver judgement.

Now is the time however for these entities to be seen for what they are and the presentations of the gateways they use in order to enter the human host and the human reality. A psychic who is able to uncover multiple layers and move false screens and access the core of any situation will be able to see these entities clearly, how they affected the host and how they hijacked and inverted a 'twin flame in potential couple' and parasitically drain the lifeforce and creative expression of the couple including the prevention of new souls coming into incarnation through their union, choosing them as parents.

However, one must also realise that the entities did not just turn up unannounced. They were invited in.

All keys, codes and catalysts needed for seeing the real convoluted truth within this very public relationship can be accessed within my video ‘Jack Sparrow and Princess Mera.’

If you want to really dive deep into this dynamic, then you can listen to this video last thing at night or prior to meditation but be aware that in order to truly understand this dynamic you will need to see the entities involved and be aware that they will also see you.

Armed with Excalibur as you go forward into this discovery, offering respect to the entities for doing the job they were called on to do, you will be afforded respect back and will not be influenced or attached to by the entities you see.

However, it is not necessarily a pleasant journey, yet it could be an interesting one depending on how you approach it.

Hold absolute intention as to why you are making this journey of discovery before you step into the battleground. Curiosity or celebrity adoration or any judgement or bias is not reason enough and will not afford you the shielding you will need when you set foot into this distorted twin flame dynamic.

As non-judgmental observer you would step forward. Holding reasons that involve your own evolution or that of others is an aligned intention.

You have asked the question so therefore I can provide the response.